Satic’s proprietary Power Perfect product line is the culmination of repurposing the advanced wave-form and harmonics filtering technology achieved by industry leaders including NASA and Texas Instruments as well as our own multi-million dollar fueled decade of relentless innovation, research and development by our engineering team.

The ever-increasing number of humans with DC powered devices like cell phones and tablets, combined with the switch to LED lighting, crypto currency miners, indoor grows and increasing move to renewables such a wind and solar create an electrical environment that is an ever-changing landscape. Do not be misled, the state of today’s electricity is vastly different than it was 20 years ago. As the engineers and manufactures that you depend on, how do we keep up?

CAN I = Constant And Never-Ending Improvement

Each Satic product currently offered is at least Generation II with Gen III products currently under development as well as new releases slated for 2020 that will further shift the paradigm. Satic is debt free with no special interest group driving our tech development. Our mission directive is our own. The Clean Power Paradigm ~

Each Power Perfect™ product was thoughtfully engineered with the specific goal in mind of effectively replacing what is currently available with a new paradigm being clean power. The design mandate had to include mass appeal; which meant being affordable, easy to use and truly effective.

As manufacturers, we take tremendous pride in engineering our products to the highest standards of quality and performance. Our engineers were absolutely driven to make the most effective line of products of this type available on the market today at any price. To that end, we source the finest components available and assemble to the highest six sigma standards of quality.

As a result of our superior design, components, and engineering, we feel we have no real competition in our market space.

1. Voltage ~ volts (V): are a unit of electrical force or potential difference that will cause a steady current of one amp to flow through a resistance of one ohm.

SATIC Simplified ~ voltage is a measure of the electrical pressure or how hard the amps are being pushed. 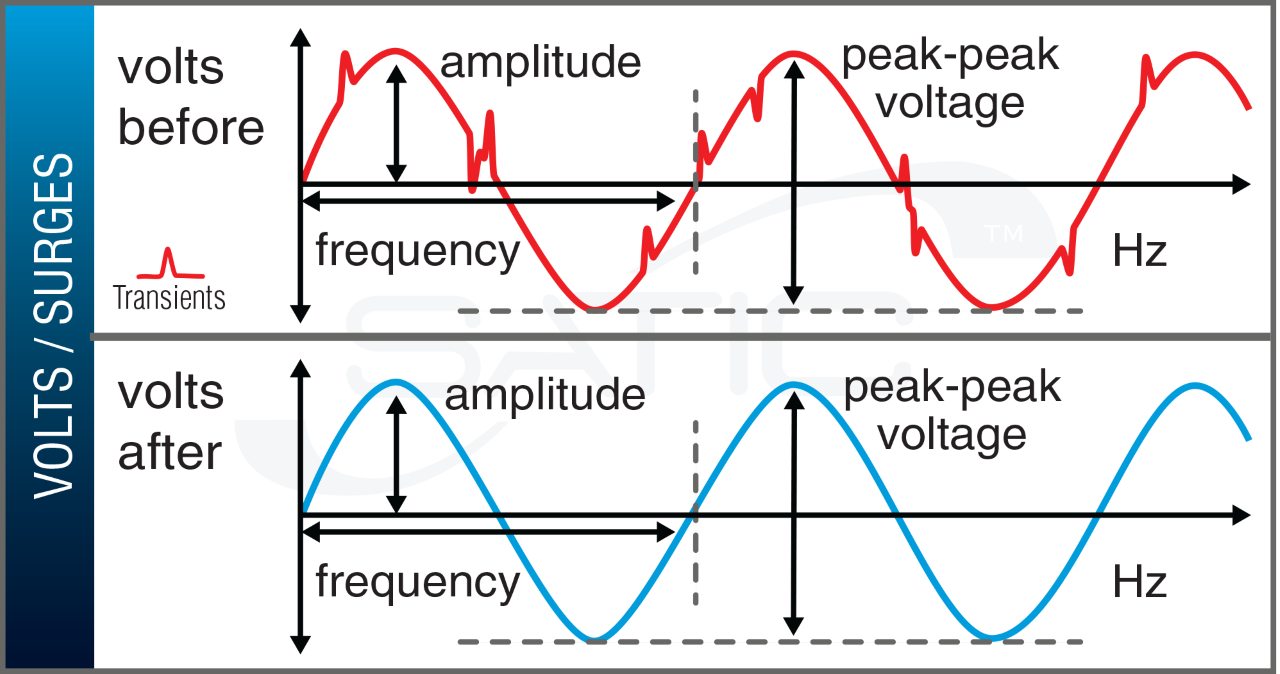 2. Amperage ~ amperes (A): commonly referred to as amps are a unit of electrical current or flow rate of electrons. One volt across one ohm of resistance causes a current flow of one ampere.

SATIC Simplified ~ amperage is measure of how much current or how many electrons are flowing and is therefore the flow rate of electrical energy (electricity) measured in amps. 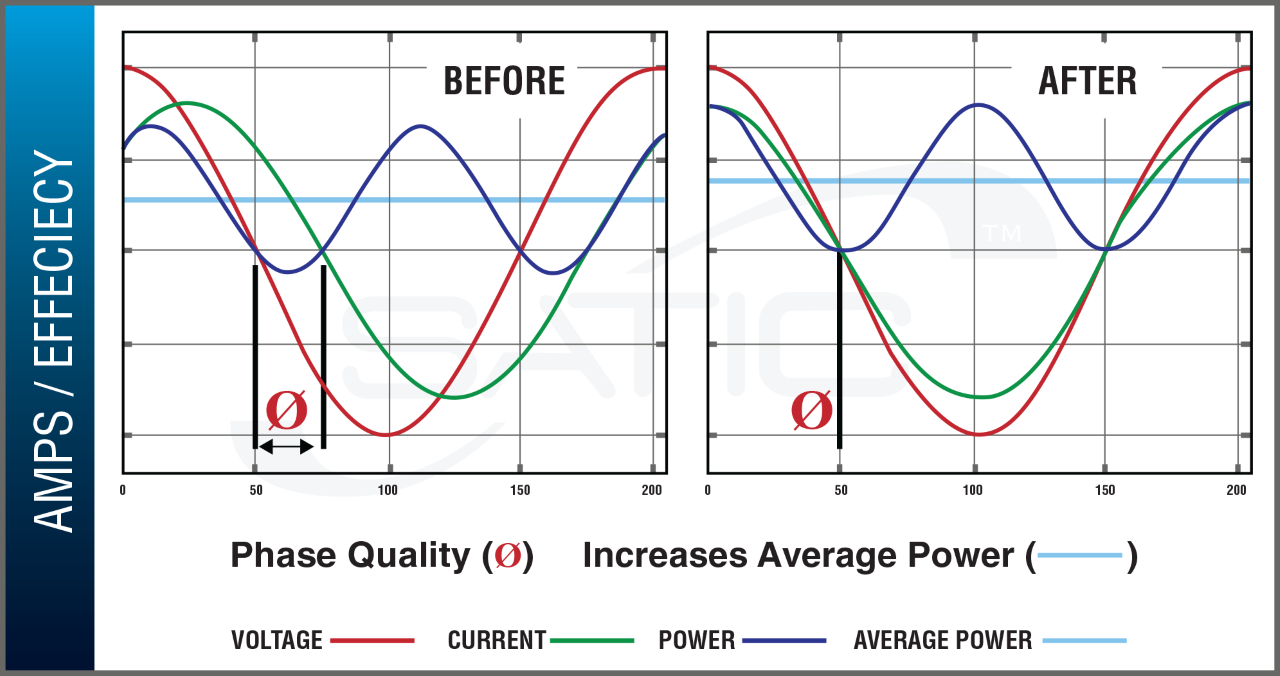 3. Watts ~ power (W): are a measure of power and the product of voltage and amperage and the rate of energy transfer equivalent to one ampere under the electrical pressure of one volt. One watt equals one joule per second.

SATIC Simplified ~ watts are the measure of real working power.

SATIC Simplified ~ kilowatt-hours are the measure of real working power used over time and are the standard of measure utilities use to bill for electricity.

5. Power factor ~ ratio (PF): is the ratio of actual real power being used, measured in watts, to the total power that is being drawn from a power source, expressed in volt-amps (VA). 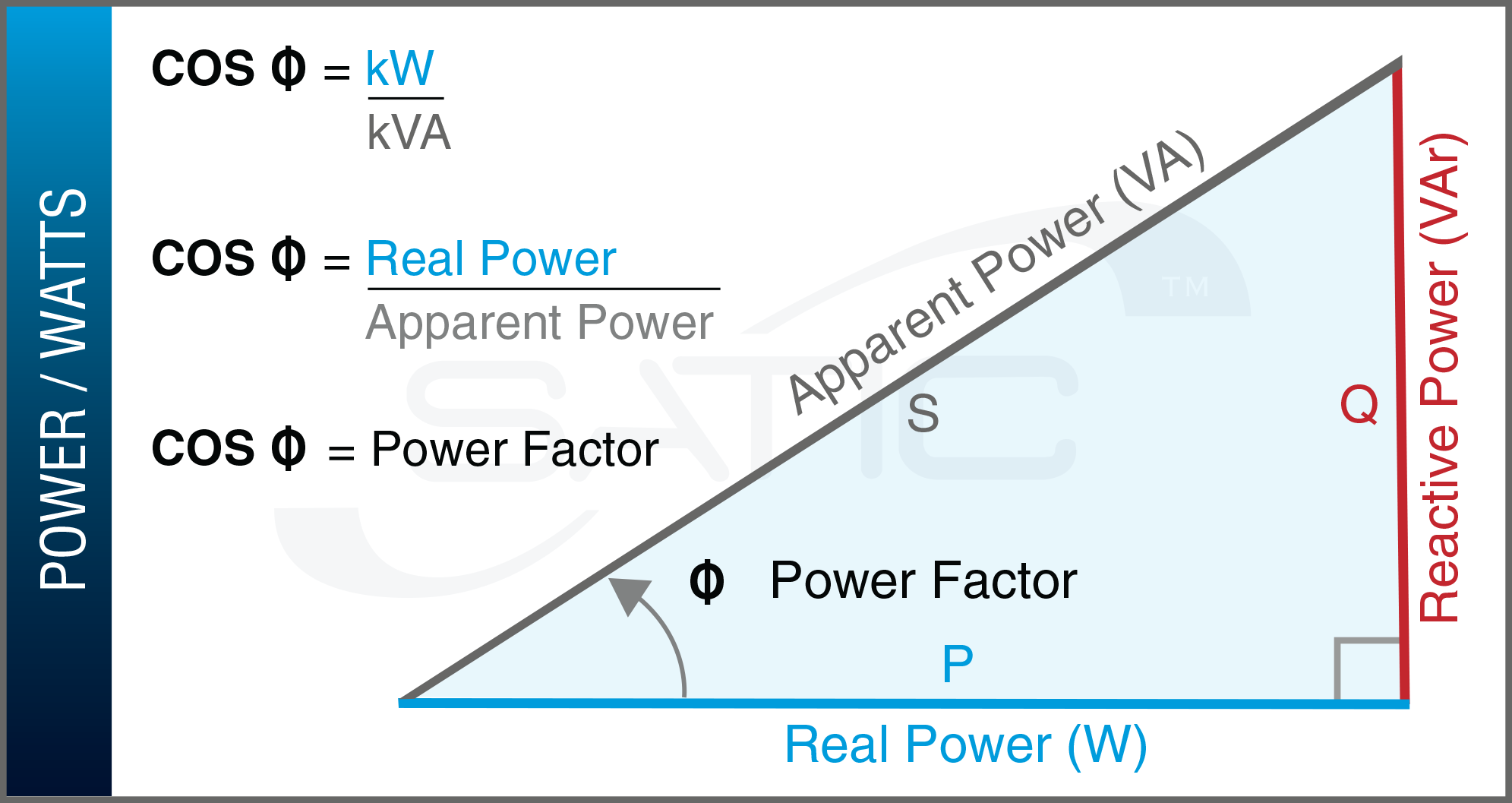 6. Total harmonic distortion ~ ratio (THD): is the measure of the harmonic content or number of unwanted frequencies in the output waveform in addition to the primary or desired frequency (50 or 60 Hz.). Energy in these harmonic frequencies is lost and may cause excessive heating of the load.

SATIC Simplified ~ THD is the how far the real-time waveform is from ideal (60Hz of 50Hz) and how many undesired frequencies are on the wave.

Satic is proven to lower harmonics and distortion. 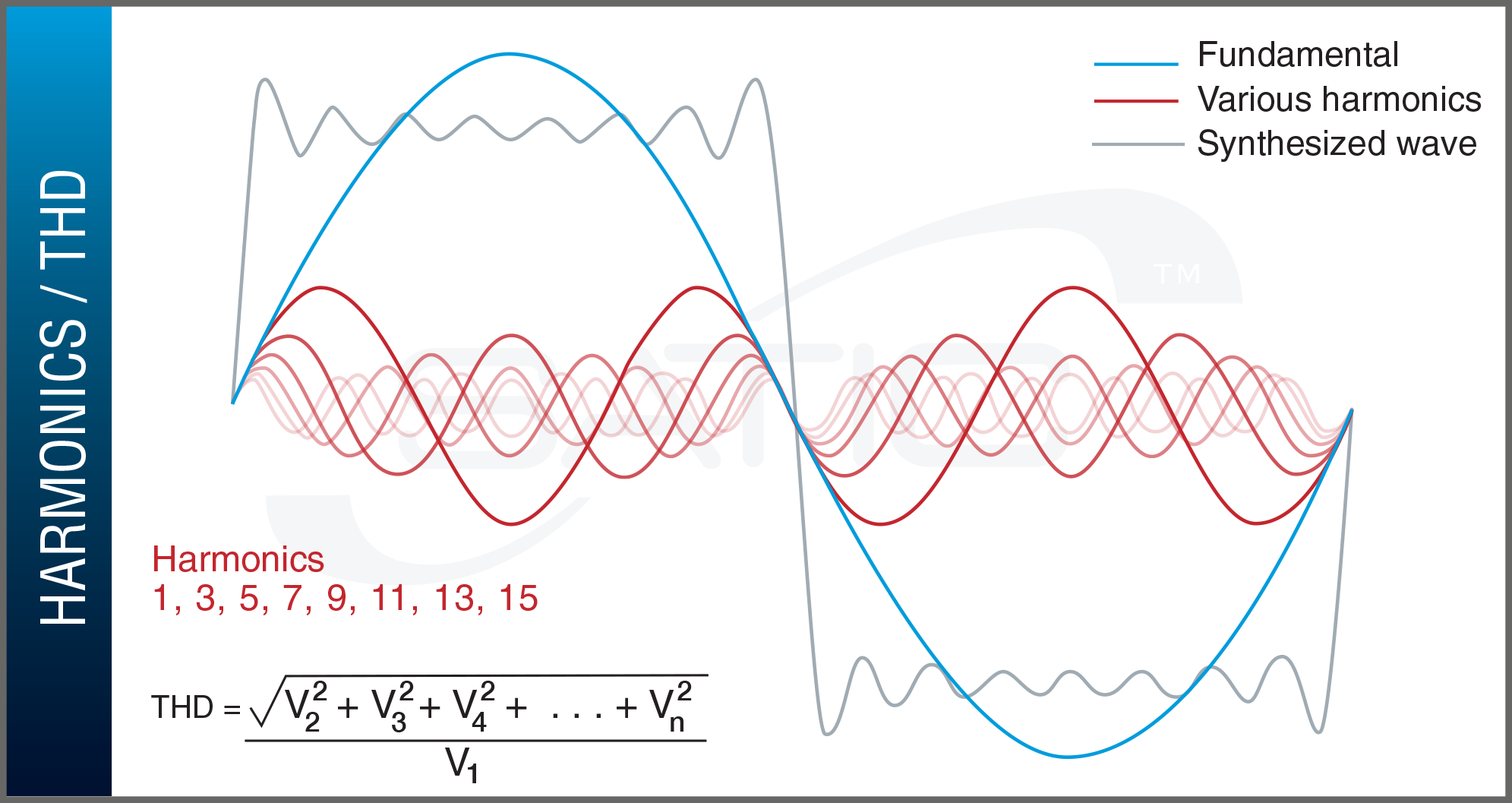 7. Electromagnetic fields (EMF): Electric and magnetic fields are invisible areas of energy (also called radiation) produced by electricity, which is the movement of electrons, or current, through a wire. V/m, μT, W/m2.

The magnetic field results from the flow of current through wires or electrical devices and increases in strength as the current increases. The strength of a magnetic field decreases rapidly with increasing distance from its source. Magnetic fields are measured in micro-teslas (μT, or millionths of a tesla).

Power lines produce magnetic fields continuously because current is always flowing through them. Electric fields are easily shielded or weakened by walls and other objects, whereas magnetic fields can pass through buildings, living things, and most other materials. 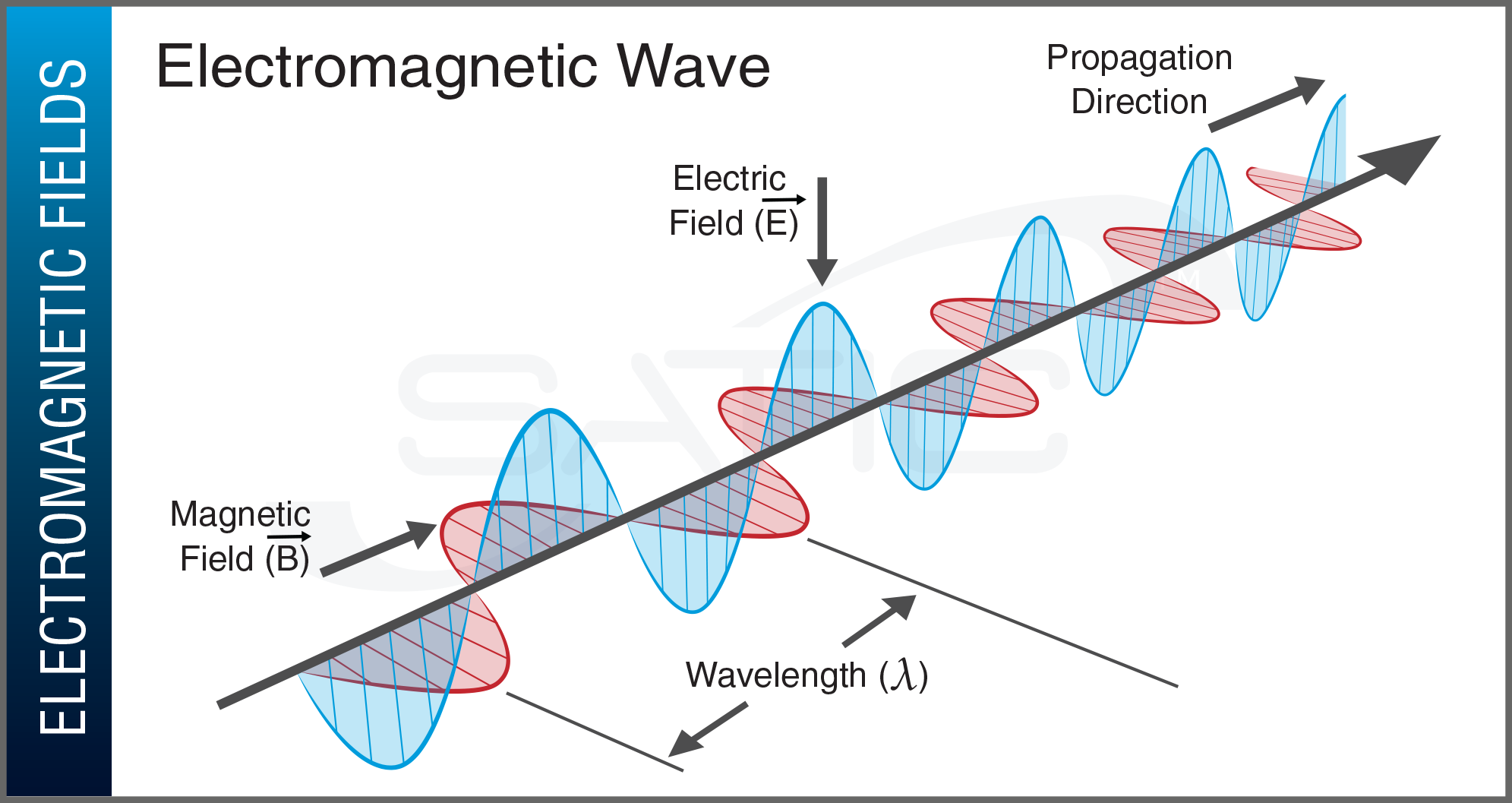 8. Interference: any unwanted signal that’s combined with the desired signal is called interference and can come from external systems as well as from within a circuit itself. External sources include a number of sources such as power lines, RF transmitters, nearby conductors, ignition systems, or motors that turn on and off drawing sudden large currents. 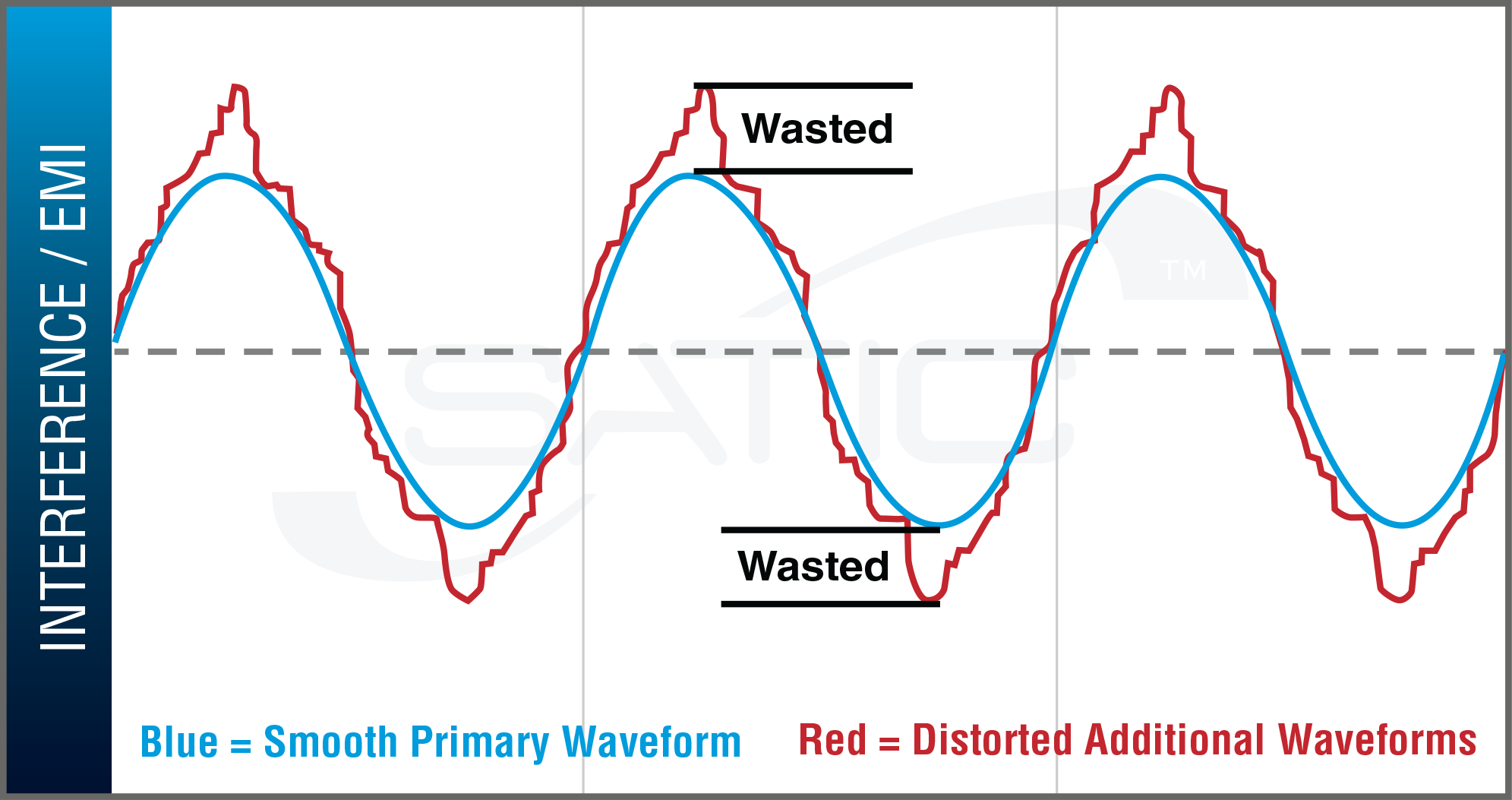 9. Ohms ~ resistance (R): Is a unit of electrical resistance of either a resistor or conductor which opposes the flow of an electric current resulting in the generation of heat in the conducting material. The measure of the resistance of a given conductor is the electromotive force needed for a unit current flow, stated in ohms.

SATIC Simplified ~ Ohms law of resistance is a measure of how much of the electrical energy being converted to heat, sound, light or mechanical work as electricity travels through the circuit. 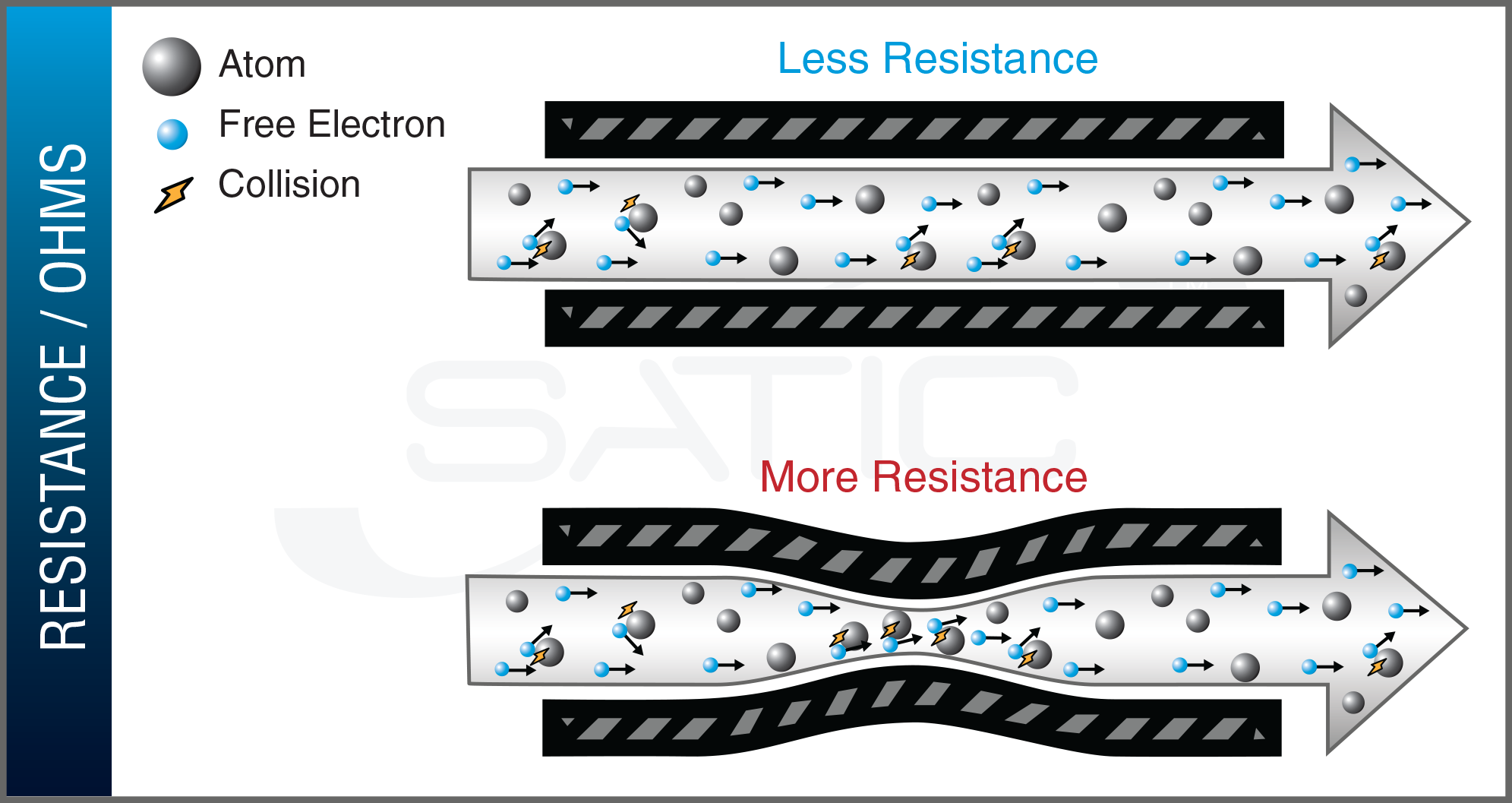 10. Hertz ~ frequency (Hz): The number of repetitions per unit time of a complete waveform, expressed in Hertz (Hz).

SATIC Simplified ~ Frequency (Hz) is how often an event repeats itself. How many waves hit the beach in one minute is their frequency.

Satic saturates out at and maintains primary frequency. 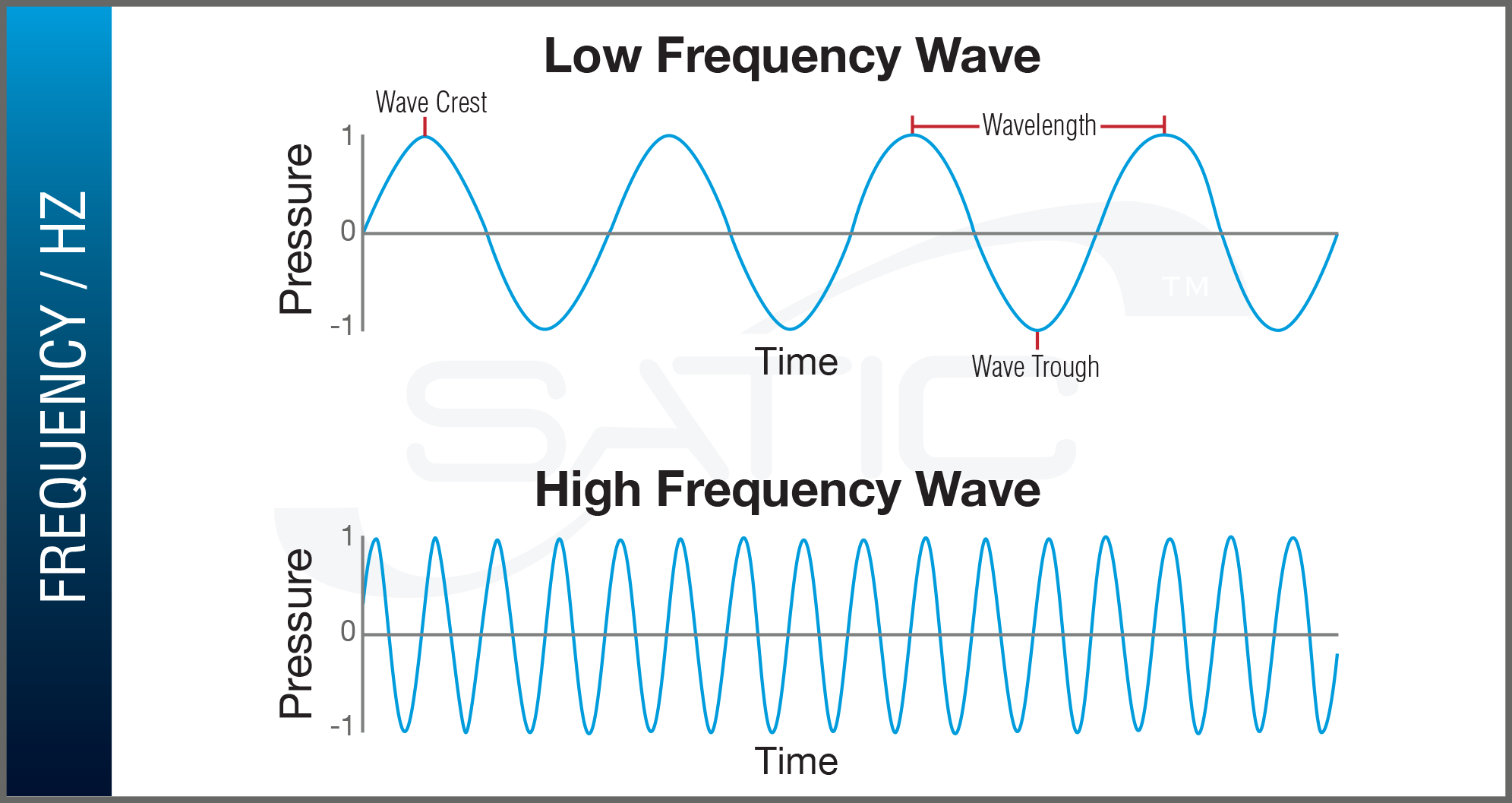