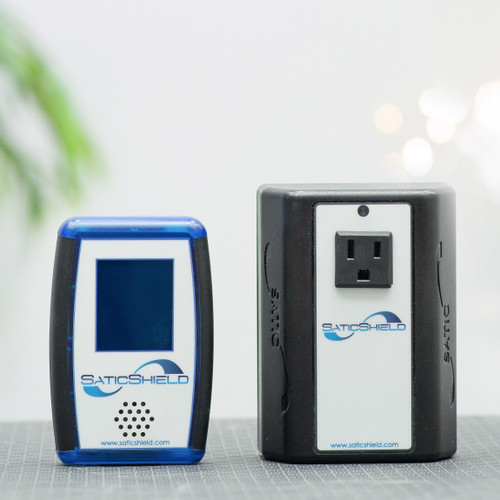 The Satic Pure Power Plug-In is for those in homes or offices with high levels of EMF and EMI, commonly called “dirty electricity”.

The Pure Power Plug-In plugs into any standard 120V outlet to reduce negative harmonics and EMF radiation while increasing efficiency and reducing power costs for common appliances such as refrigerators, freezers and air conditioners. One Pure Power Plug-In will filter and condition the power on the circuits on a single phase.  This product is also known as the EMF Eliminator.

Combined with our EMI Line Monitor, you can test for and eliminate harmonic distortion in any room you occupy.

The Satic EMI Line Monitor measures electromagnetic interference that is commonly referred to as "dirty electricity" on AC power lines.

Once plugged in, the monitor immediately displays total line interference, also referred to as line noise, rated in millivolts as measured from peak-to-peak, ranging from 0-2999mV.

The unit records peak mV while also displaying real-time mV numbers. The LCD display adds a second visual indicator in the form of a visual swoosh-shaped line diagram indicating peak interference before and after filtering as well as displaying voltage.

A speaker adds an audio indication proportionate to the real-time line interference.

3 Year Warranty for Pure Power Plug-Ins. One year limited warranty from date of purchase under normal use and service for EMI Tester.
×